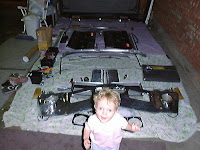 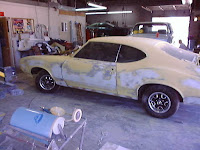 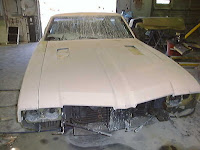 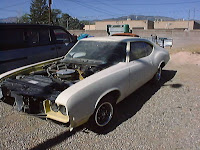 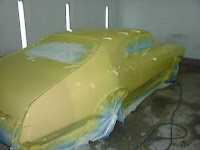 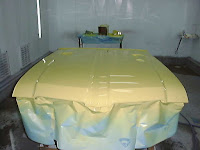 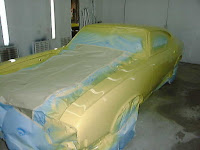 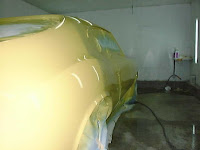 A full complete paint job was completed in 1999. It has held up exceptionally well (it is garaged). The work was fairly extensive, with prep work and rust repair performed by myself (usual places in wheel wells). The car was originally from Arlington, Texas where it was manufactured and originally owned. I met the original owner about a month after I purchased the car off a lot in Albuquerque. She mentioned the car has been in Albuquerque since the early '80s.

Some panels were taken to bare metal including the hood. Urethane primer was used including many stages of blocking and sanding. This paid off in the end. The color is GM paint code 56, Sunfire Yellow. The factory used a single stage paint back in 1972. I decided to go with a Base color/Clear coat finish. This holds up much better to wear and tear from the weather and UV.

I decided to completely strip the car myself and then reassemble the car at home. I was able to detail all the brightwork. The car was in the shop for at least a month, I drove it home with no bumpers or lights...very carefully :-)

All Rights for the images reserved to madmax442.com, if you keep them,please keep the credit.